An unholy union between the OSR and PbtA. A modern take on fantasy rpgs compatible with the classics. 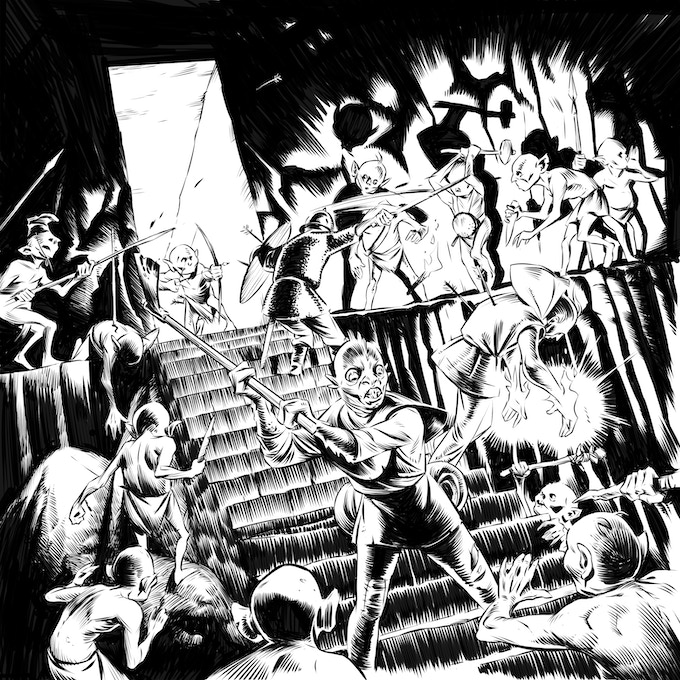 Vagabonds of Dyfed is designed to emulate old-school rpgs with streamlined mechanics. It focuses on “traditional” emergent storytelling and fictional positioning, while leveraging a cut-down Powered by the Apocalypse mechanic.

Vagabonds picks the pockets of greater games: World of Dungeons, Barbarians of Lemuria, Blades in the Dark, City of Mist, the Black Hack and the Whitehack, and of course Moldvay’s venerable Basic.

The game is (mostly) mechanically compatible with OSR retroclones, but benefits from a non-binary PbtA style system.

Basically, we set out to make World of Dungeons on steroids and came pretty close.

The GM principles and methods are written to:

The game is built to be as close to compatible to 0e and B/X (Moldvay style) as possible.

While 2d6 + mod isn’t compatible with B/X AC and attack rolls, this isn’t the first OSR game to eschew such mechanics (Maze Rats, Barbarians of Lemuria, Black Hack). Since the roll is based more on what the character can accomplish as opposed to the nature of the challenge, it plays more like the Whitehack and many other OSR saving throw systems (Labyrinth Lord, etc).

Even though you can ignore a monster or a challenge’s attack and AC, there are mechanics for tweaking especially difficult tasks or enemies. There’s a thorough section on converting and creating monsters from old school games (with many must-have monster statblocks included) making it easy to adjust as necessary.

Most OSR modules, adventures, spells, and monsters are ready to pick up and play as is. Converting the few things that don’t perfectly align is trivial and can be done on the fly. Grabbing your favorite adventure from DCC, LL, or Basic takes almost no additional prep.

One of the biggest departures from the OSR is the way characters are created; less random and more flexible than most old school games. The closest OSR analog is Barbarians of Lemuria or Whitehack, but chargen is solidly in the “new school” camp.

Each player defines a few traits that describe the character (their approach, their background, etc) and when those traits are relevant they gain a bonus to their roll. Additionally characters have lineages (elf, dwarf, etc) and special abilities, spells, and so forth.

Other than those associated with magical mutations or traveling through the harsh wilderness, Vagabonds doesn’t have many random tables. We feel that there is an endless supply of those already out there; Vagabonds is trying to streamline the systems at play, not provide a lot of additional flavor or content.

What OSR Games is it most similar to?

It plays like a combination of White Hack, Maze Rats, and Basic.

The game’s presented in a barebones, compact way. It can be hard for those used to other PbtA games to pick it up and run it like Dungeon World or Fellowship. Much of the advice and GM material found in other PbtA games is absent here; and that’s by design.

Vagabonds is meant to be as light and dense as possible; while there’s little to no advice, GM moves, or spelled out agendas, there are dozens of examples and principles to follow. We feel that the spirit of the game will come naturally to those through its play.

Well, sort of. There are several character “archetypes” in the back of the book which function very similarly to playbooks. However character creation is a lot like World of Dungeons mixed with City of Mist — a combination of free form traits and player selected abilities.

Basically there’s a system in place for “building your own playbook,” not unlike early versions of Blades in the Dark or Uncharted Worlds. If you’ve played Freeform Universal, RISUS, or Fate, it won’t be unfamiliar.

The core is limited to a single move; basically Defy Danger. Most of the time the GM can make a ruling or interpretation and move on. However, there are tons of additional moves in the form of techniques.

Techniques are structured like PbtA moves but fill the role of spells, feats, or special abilities from other fantasy rpgs. All of these techniques conform to genre conventions (fantasy skullduggery), but since they’re not bundled into playbooks you’re able to mix and match til your heart’s content. This allows you to maintain the PbtA principle of sticking to the theme of the game without restricting you to a confined playbook structure. It’s admittedly more burdensome on the player (you can use the Archetypes all the way through level 6 if you wish) but the added customization is half the fun.

While related, it’s pretty dissimilar to those games. There’s much less meta-collaboration or player agency. Some might call Vagabonds primarily “actor stance” as opposed to “author stance;” the game encourages a clear distinction between GM authority and player input.

Dungeon World is of course a huge source of inspiration (it is what gave rise to World of Dungeons in the first place) but many of its rules have been discarded in favor of simpler, older, harsher ones. Likewise, it plays very differently due to the single-roll attack + damage, lack of playbooks, and shallower overall power curve.

What Else Is in the Book?

Check out the table of contents, or review the list below: